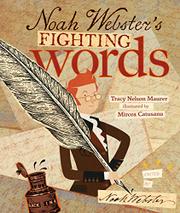 The story of Noah Webster, America’s original man of letters.

Noah Webster was concerned with letters, literally. With America formally separated from England, he wanted to break away from Great Britain in every way. As a classroom teacher, he saw that students didn’t learn American geography or American history or read American stories. And students used British grammar books. So, the same year the American Revolution ended, he published A Grammatical Institute of the English Language, and his spelling book became America’s first bestseller. Webster also believed in simplifying spelling, so that words would be spelled the way they sounded: center instead of centre, jail instead of gaol, iz for is, and hed for head. Though not every suggestion caught on, he changed the spellings of more English words than anyone ever had. Maurer, ever mindful of her own words and spelling every one carefully, has crafted a text that reflects Webster’s feisty personality and provides enough history to establish sufficient context for Webster’s work. Catusanu’s mixed-media illustrations combine child-friendly depictions of Webster, Benjamin Franklin, and others with period drawings and excerpts from period newspapers, books, and Webster’s own handwritten letters. Digitally collaged speech bubbles and the occasional obviously anachronistic image give the design a lively feel. Young readers encountering new words here will know where to find help—Webster’s dictionary!

An attractive volume demonstrating that even words themselves have a story.