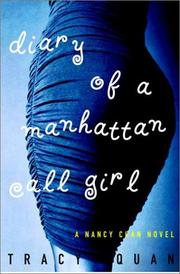 THE DIARY OF A MANHATTAN CALL GIRL

Narrator Nancy decided at age 10 that she wanted to be a prostitute and began turning tricks at 14. Now in her early 30s but passing for much younger, Nancy has risen through the ranks to what amounts to the top of her chosen career: possession of her own book of regulars supplemented by referrals from a high-class madam. But then she faces an unexpected conflict. Nancy’s boyfriend has proposed, and she has accepted, well aware that her new fiancé is clueless about her worklife. (She uses freelance copyediting as her cover.) As he pushes her to start apartment-hunting with him, Nancy panics. She won’t be able to work at home once she marries, she realizes, but she’s not sure she wants to give up prostitution. Nancy ruminates about the choice she must make as she takes us through her routine: assignations; shrink appointments; shopping trips to return bras; visits to the hairdresser, gym, and waxing salon; and arguments with her two best friends, each of whom occasionally teams up with her on tricks. A subplot about Nancy’s friend Ally and her involvement with “The New York Council of Trollops” takes on sudden importance in the last 20 pages when a less-experienced call girl is blackmailed by a very young computer nerd. Probably due to its origins in a column, the novel has a repetitive, static quality. Quan reintroduces characters and recites basic information over and over. You may learn more about pubic waxing than you ever want to know, ditto dildos.

The matter-of-fact descriptions of sex as a job are decidedly un-erotic, but Nancy does seem to enjoy her work, which she takes more seriously than most readers will.