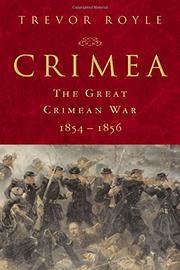 A thorough, engaging account of the causes, events, and consequences of the Crimean War by Sunday Herald journalist and popular historian Royle (Precipitous City, 1980, etc.)

Royle acknowledges in his first sentence that the war, so often chronicled, is “either one of history’s bad jokes or one of the compulsive subjects of historical writing.” He covers not just the military, but also the political, social, and even religious aspects of the war that pitted Russia against the allied forces of France, England, and the Ottoman Empire. Royle does a splendid job of handling his complex subject and succeeds in fairly representing all sides. The war featured a cast of characters stunning in their subsequent celebrity: Napoleon III (nephew of Napoleon Bonaparte), Charles Dickens, Nathaniel Hawthorne, Florence Nightingale, Queen Victoria, Czar Alexander II. They all figure in the horrors that began as a dispute over the key to the main door of the Church of the Nativity in Bethlehem and ended with the loss of thousands of lives on the Black Sea peninsula. Less well known, though ably animated here, are the various military leaders involved in the cause, principally Lord Raglan (a Waterloo veteran who died of illness during the conflict), the Earl of Cardigan (who led the Charge of the Light Brigade), Omar Pasha (an Ottoman leader), Gen. Saint-Arnaud (a French commander), and Gorchakov and Paskevich and Menshikov (the principal Russian commanders). Royle is especially effective at demonstrating the effects of the press on the conflict (for this was the first war in which newspaper correspondents figured prominently), and at identifying the rapidly changing technology of warfare (telegraph, semaphore, railways, and balloons emerged as important tools of battle).

Royle has fashioned what will be the standard popular work on the subject.