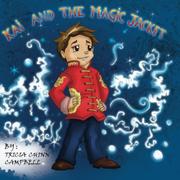 KAI AND THE MAGIC JACKET

A debut picture book about a modern-day boy who meets his Chinese ancestors.

As the story opens, a mysterious red box appears on Kai’s doorstep. In it, he finds a beautiful red silk jacket. Kai is mystified when his mother calls the jacket a “special gift” and adds, “You’ll understand what I mean one day.” That night, he falls asleep with his new jacket on, and is awakened in the middle of the night by three magical visitors: Tai-Poh, Tai-Goong and Uncle Fay. They tell him that all firstborn children in his family receive this special jacket, and with it, their guidance. Several days later, when Kai’s cousins tease him about being too scared to cross a dangerous river, his ancestors warn him to “do what is right, not what someone else wants him to do.” Kai listens and resists his cousins’ teasing, potentially averting a disaster. As months pass, Kai’s ancestors continue to advise him, but soon the jacket is too tight, and Kai also learns he’s going to be a big brother. He puts the jacket back inside the red box and it disappears in a twinkling of light, but he knows his ancestors will always be with him. Campbell delivers a story that at times seems a bit scattered; are young readers receiving a lesson about the importance of not giving in to peer pressure, or is the book preparing soon-to-be older siblings for a family’s newest arrival? The book emphasizes that Kai is his family’s firstborn child and that only firstborns may wear the magic jacket, but much of the narrative leaves this behind, instead dealing with why it’s important for Kai to reject his cousins’ teasing. However, even if its focus is a little unclear, the narrative itself feels fresh, and the illustrations are bright and cheerful. Readers may find that the pacing feels rushed in places—several months pass during the course of the narrative, which seems odd for a picture book—but the effect doesn’t overpower the story. Although some of the characters could have been a bit more fully developed, they’re still all distinct enough to carry the story to its conclusion.