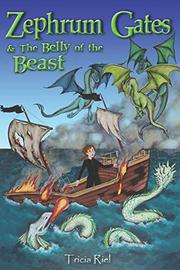 ZEPHRUM GATES & THE BELLY OF THE BEAST

From the Zephrum Gates series, volume 3

Zephrum Gates and her friends are back and must confront the rising evil that threatens all of humanity.

In Riel’s third novel in the Zephrum Gates series, Zephrum believes the evil Strasidous Rowpe to be vanquished, but she soon learns that the villain has risen from the dead after merging body and mind with a goblin. Now renamed Virgidous, he is out to gain ultimate power over all things and to finally capture Zephrum. Virgidous learns from notorious goblin seer Grizalda the Great that his plan for world domination will only work with the help of the infamous Zephrum. Meanwhile, Zephrum and her friends return for a new school year at the Fiddlesticks School for Alternative Thinkers With Unusual Abilities. Between lessons on “Circus Art,” “Forecasting the Future Through Mathematical Trends,” and “Oceanography,” Zephrum has to learn to wield her power to control the wind while saving the world with the help of her friends and an unlikely ally. Zephrum comes to face her worst fears, meets new dangers, and faces old foes. She also falls a little bit in love with her dreamy friend Gai Holmes. Middle-grade readers familiar with Riel’s series will be better served by this fantasy novel than those completely new to it. Zephrum’s strong friendships with other girls at school and her earnest encounter with first love are the novel’s core strengths. Other elements offer ongoing appeal: the characters’ names (Sarah Bellum, Daphne Gumption, Misty Falls, to name a few), the silliness of its cackling villain with his absolutely nonsensical plan, and the adult characters who fumble helplessly along. Despite embracing its silly side, the novel maintains a weighty environmental message and kills off a beloved dog, creating an uneven narrative tone. Instances of clunky writing (“thought Zephrum in her mind”) jar but don’t fully ruin the experience.

A diverting if heavy-handed entry for series fans.