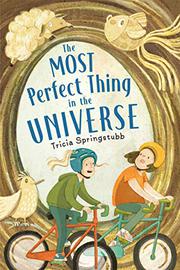 THE MOST PERFECT THING IN THE UNIVERSE

Loah’s been left—again—in the care of the elderly Rinkers while her mother is on an Arctic expedition.

A determined homebody, 11-year-old Loah doesn’t enjoy her mother’s long, sometimes perilous journeys. This one’s been unexpectedly extended since her mom, an ornithologist, believes she’s spotted a loah bird, the very rare animal for which Loah was named. Stiff, seemingly unemotional Miss Rinker and her brother, gentle, bumbling Theo, are nice enough, but they are inadequate substitutes for a mother who is so deeply engaged in her professional life. When Loah befriends Ellis (or L.S., whose real name is Little Squirrel), a girl just as deeply in need of TLC as Loah, it puts into motion a series of tender gestures. One lovingly crafted character after another (most seemingly White) reaches out to offer unexpected, desperately needed support, demonstrating a remarkable chain of interconnectedness. As Loah’s mother had said, “All living creatures depended on one another in ways big and small.” With mysterious noises emanating from Loah’s crumbling home’s turret, Ellis’ seemingly monstrous grandfather, a threatening, busybody home inspector, and a suspenseful accident in the Arctic, there is plenty to keep readers engaged in this heartfelt exploration of goodness. Never-intrusive environmental lessons are an added bonus.

Satisfying and life affirming: a perfect thing in the universe of juvenile fiction.