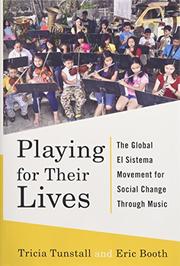 PLAYING FOR THEIR LIVES

The Global El Sistema Movement for Social Change Through Music

In this follow-up to Tunstall’s Changing Lives (2011), which examined the growth of El Sistema in Venezuela, the authors look at the expansion of this artistic-social project around the world.

Activists and artists Tunstall and Booth traveled to 25 countries interviewing directors, teachers, students, and parents involved in more than 100 El Sistema–inspired musical and educational programs to understand how the project’s principles are working in diverse environments “from Kabul to Rio, from Bethlehem to Soweto, from Manila to Manhattan.” Acknowledging that research is not yet available to provide sufficient hard data about the program’s value, the authors give their own assessment of El Sistema’s impact, looking at its challenges and struggles as well as its successes. From its beginnings some 40 years ago in Venezuela, it reached out to children of poverty; in Europe today, it reaches out to children damaged by ethnic segregation and prejudice. The organization’s goal is to create not just musicians, but responsible citizens, and to that end, El Sistema tries to provide children of all skill levels with a musical community where they develop self-discipline, confidence, and cooperative skills. The book contains three main parts: the first is an explanation of what El Sistema is, how it started, and how it has spread; the second is a close look at each of its six core principles; the third is an overview of how it operates in different cultures, the various ways it is funded, and the networking that links its far-flung programs. Profiles and personal stories abound, and material that did not fit into the narrative flow appears throughout in boxed inserts, which is occasionally somewhat unwieldy. Appendices provide specific information on how one can become involved and lend the movement support.

A wide-ranging, highly positive assessment of the El Sistema movement, serving as both inspiration and manual for would-be social activists.