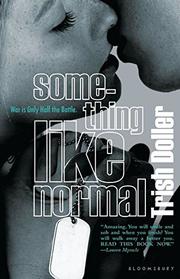 An affecting look at the experience of one teen soldier’s experience on leave from Afghanistan.

Travis is trying hard to pretend everything is normal, but there's nothing normal about this little chunk of life at his former home in Florida. His girlfriend is now sleeping with his little brother, a smug, self-interested bastard. His friends don't understand why he can't just slide back into his stupid pre-Afghanistan life. His mother worries nonstop. The only thing that's normal is that his father, an ex–football player who bullied Travis mercilessly into playing the game, still seems to hate his guts. At least when he was with his unit, they all understood how their shared hellish experience has affected them. An unlikely encounter with Harper, a girl he humiliated in middle school, gives him a sense that, maybe, a normal life might be something he can shoot for. Travis' present-tense narration puts readers directly into his uneasy psyche; he only gradually reveals to himself as well as readers the extent of the damage he has taken in the desert. If the growing relationship between Travis and Harper seems too good to last and the sudden stiffening of his mother's spine unlikely, readers will be so invested in Travis' poor, shattered soul they will forgive narrative convenience.

At its heart, this too-timely novel is purely honest.