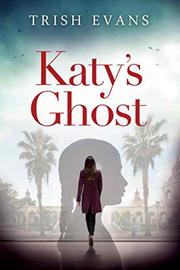 In Evans’ debut novel, a former teacher, haunted by a phantom, learns to move beyond fear and toward acceptance.

Katy Welborn McAndrews is a breast cancer survivor, but despite being cancer-free for three years, her doctor advises her against getting pregnant, as it could raise the risk that the cancer will return. Then Katy receives a visit from the spirit of her beloved grandmother, who died 11 years ago. Despite her death, it appears that Gram hasn’t lost the usual spring in her step. During her frequent visitations and reminiscences, she and Katy pore through their pasts, uncovering old hurts and fears along the way. Despite the somewhat familiar nature of the narrative, Evans throws in a few twists and turns; for example, an early plot thread about Katy’s uncle Rollie and younger sister Wendy appears to be heading toward predictable territory, but takes an unexpected, sharp turn to become an exploration of heredity, and how a child’s perceptions shape the adult they later become. Although the fearful nature of Evans’ protagonist can be occasionally wearying, Katy still comes across as a realistic portrayal of a trauma survivor, and her steps toward freedom as she escapes the shackles of her past feel earned. The ghostly Gram is also a fully realized character, offering verve, timidity, and regret in varying measures as Katy’s understanding of her deepens. That said, other secondary players feel flat and underdeveloped, and the chronology of the narrative feels unclear. Overall, though, Katy and Gram’s story has moments of wit and sublime epiphany.

A moving, if occasionally flawed, exploration of one woman’s attempt to conquer lifelong anxieties.