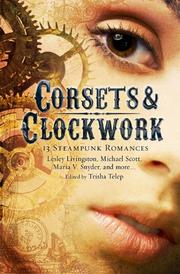 Simply sticking a few gears in does not steampunk make, no matter what the subtitle says.

The 13 stories, from a range of authors including several who have previously written mostly for adults, range from romance to horror, cover a gamut of times and places and include both the sublime and the sublimely bland. The opening story has both corsets and clockwork but little real depth, and at least four stories are more romantic fantasy (of varying quality) with a few elements meant to evoke a steampunk ethos. Others take some elements of the genre and transport it (with fair success) to the American south of the ’50s and Nazi-occupied Poland. The best stories are those that most closely adhere a fairly traditional definition of steampunk in manners, machinery and punk spirit, like Frewin Jones’ weirdly wonderful “The Cannibal Fiend of Rotherhithe,” with its half-mer cannibal heroine and a plucky boy who might be true love or just a snack; Adrienne Kress’ “The Clockwork Corset,” high romance with a spunky cross-dressing heroine; and Kiersten White’s excellent closing tale, “Tick, Tick, Boom,” whose narrator is a machinist and noble’s daughter who falls for an anarchist.

All in all, a diverse and too-often off-topic collection that's not steamy enough in either sense of the word but is partly redeemed by a few gems.