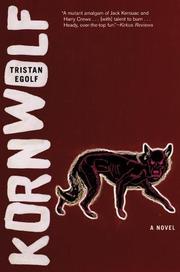 Multiple incarnations of the title beast terrorize rural “Pennsyltucky” in this raucous third, and last novel from the late (1971–2005) Midwestern author.

As he did in its predecessors Lord of the Barnyard (1999) and Skirt and the Fiddle (2002), Egolf—who’s sort of a mutant amalgam of Jack Kerouac and Harry Crews—lampoons the heartland and its comfy values. But there’s something authentically weird about the Middle Americans of the hamlet of Blue Ball in Pennsylvania’s Stepford County—as native son and newspaper reporter Owen Brynmor learns when he returns “home” to investigate reports that “The Blue Ball Devil was back.” Indeed, a particularly grungy were-person has been devouring livestock, wrecking farmland and provoking policemen. And, as Owen’s further research suggests, it’s either the “Kornwolf” of European legend (“still reviled as a spirit of vengeance, a curse of the fields”) or the progeny of 16th-century German landowner and reputed incestuous cannibal Peter Stubbe. Or both. The resulting mayhem revolves around the local Amish community, led by tyrannical Minister Benedictus Bontrager, whose physically and emotionally abused son Ephraim is suspected of strange nocturnal misdeeds (“cow tipping” and much, much worse); a gang of louts known as the Crossbills; boxing coach Jack Stumpf, whose own demons are related to his Vietnam experience; and several ostensibly good country people with generations’ worth of skeletons in their blood-stained closets. The book is heady, over-the-top fun for much of its considerable length, but its effect is diffused by a seemingly endless Walpurgisnächt finale that unimaginatively apes the kill-‘em-all conventions of the teen slasher flick. Egolf had talent to burn, but stringent editing should have whittled this burly haywire tale down to fighting weight.

An unholy mess, but a ride well worth taking. And do look for the Kornwolf sooner or later at your nearby multiplex.