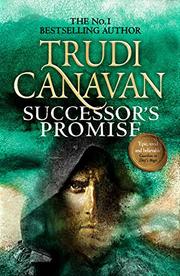 From the Millennium's Rule series, volume 3

This rather tepid third entry in the Millennium’s Rule fantasy series (Angel of Storms, 2015, etc.) picks up five years after the events of the previous book.

All that remains of the Raen, the sorcerer who ruled all the worlds for a thousand years before self-immolating, is the fire-shriveled hand kept by his assistant, Dahli. The Raen’s natural successor, Rielle, refused to help Tyen and Dahli revive him—the body the Raen proposed to use turned out not to be a blank template as he claimed but a young man wiped of his memories. Now Tyen and Rielle, the most powerful sorcerers still extant, have become lovers; neither has any ambition to become the new Raen. The usual pattern of narrative sections alternating between Tyen and Rielle manifests itself. Both hope for peace and cooperation among worlds. But the Raen’s apparently omnipotent controls and enforcement died along with the sorcerer himself, and chaos looms; especially dangerous are magic-powered attack robots that enterprising sorcerers have developed from the useful toy insects designed by Tyen. Canavan extends the story of Qall, the boy Rielle rescued from the Raen—a thread that seems to dwell on how tiresome he’s growing up to be. Tyen and Rielle do a lot of mental recapping and twiddling, possibly as a largely ineffectual effort to make the book independently intelligible. So, while sometimes as involving as before, the narrative lacks the clarity and urgency of purpose that distinguished the previous book, with any developing excitement or tension squandered; only the protagonists are vigorously drawn enough to carry readers through the less compelling parts in any case.

Undoubtedly the series will continue to satisfy many fans, while those less than totally enthralled may well find their attention beginning to wander.