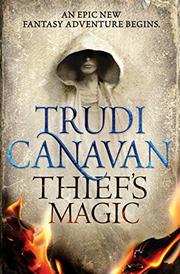 From the Millennium's Rule series, volume 1

First of a new fantasy series from the Australian author of The Traitor Queen (2012, etc.).

In one world, the use of magic results in black trails of depletion known as Soot, until eventually more magic seeps in to replace it. Student sorcerer-archaeologist Tyen Ironsmelter discovers a sentient book named Vella in an ancient tomb. A thousand years ago, Vella was a real woman until transformed by the era’s greatest sorcerer. She still has her memories, and she can also absorb the knowledge of any person who holds her. She tells Tyen that magic can be generated by creativity; modern scholars disagree, though it’s indisputable that their world's magic-powered industrial revolution is rapidly depleting the magic. Reluctant to give up such a powerful tool to professor Kilraker, his supervisor at the Academy (where, of course, no women are permitted), Tyen conceals Vella—and when Kilraker learns of her existence, he accuses Tyen of theft. Facing ruin as well as the loss of Vella, Tyen steals an aircart and flees. In another world, meanwhile, only (male) priests in the service of the Angels may wield magic. Here, using magic creates Stain, black blobs of depletion that fade only slowly. Dyer’s daughter Rielle Lazuli can see Stain, but if she attempts to use magic, she’ll be stealing from the Angels. Unwilling to accept a husband selected by her parents, she runs away to live with painter Izare Saffre. From a “tainted” woman, Rielle learns how to wield magic only to become the target of blackmail by corrupt young priest Sa-Gest. Canavan narrates in a pleasant tone of voice, the plotting is plausible and the backdrops reasonably persuasive. Characters, though, tend toward the bland.

Despite the lack of sharp edges, Canavan's creation is intriguing enough to tempt patient readers back for more.