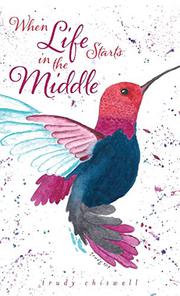 WHEN LIFE STARTS IN THE MIDDLE

A writer recollects her transformation from a cautious, unconfident woman into a successful, self-assured one.

Debut author Chiswell grew up the youngest of three daughters, an “introvert” like her father and a “gentle soul” like her mother. When she was a “passive” teenager not quite 19 years old, she married her first husband, Jim, a union that was a “disaster from the day of the wedding.” Three years later, the mother of two children and desperately unsatisfied with her life, she finally suffered an extreme bout of melancholy diagnosed as chronic depression. But after she divorced Jim and married Ralph, a remarkably encouraging husband, she experienced an “incredible transformation” that would continue for the rest of her life. A self-described “late bloomer,” Chiswell went back to school at 42 and underwent a kind of intellectual awakening—she once considered herself a “dummy” but discovered she had an undiagnosed learning disability and actually possessed above-average intelligence. She earned a 12th grade certificate and, before she turned 50, she had a college diploma in graphic arts production. When she turned 60, she started her own medical software business, which she later sold. The author endearingly describes the way in which finding God—she became a born-again Christian—gave her the strength to overcome obstacles to happiness that once seemed insurmountable: “The storms of my life had pummeled me at times. There was emotional debris scattered all around me, but I had faith there was an end to it and then the sun would come out.” Chiswell’s remembrance is both touching and inspirational—she candidly details her struggles, but maintains an indomitably cheerful tone. Her prose is straightforwardly intimate and anecdotal and always lucid, if sometimes prone to clichés—she likens her depression to being covered by a “wet blanket.” But her story, while sweetly positive—the book is filled with poems and the author’s hand-drawn illustrations—is unlikely to grab the attention of an audience beyond those acquainted with her. Her story is too irreducibly personal to appeal beyond that circle.

A delightfully happy account best enjoyed by those who know the author.