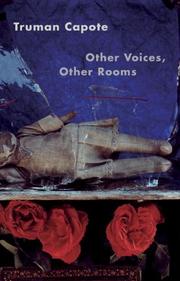 OTHER VOICES, OTHER ROOMS

A distorted, hallucinatory and—for the common reader—only dubiously intelligible interlude in the childhood of a young boy, Joel Knox, his "journey through dying rooms" as he leaves New Orleans to find his father at Scully's Landing. Joel, whose mother had died, reaches the Landing and the strange, decadent house of his father, Edward Sansom, Miss Amy, his second wife, and her cousin Randolph. The "journey" progresses from uneasiness to madness, as Joel sees his father, hopelessly invalided and speechless, and learns from Randolph of the shooting which had crippled his father, and watches the gradual deterioration of Randolph, etc. Grotesque, experimental, for a limited audience of initiates, who may, possibly, have encountered this writer first in a Martha Foley collection of "Bests."