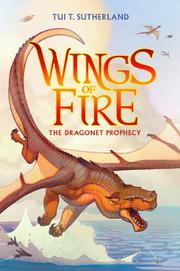 From the Wings of Fire series, volume 1

Five young dragonets find themselves destined to fulfill a prophecy that will end the war between the dragons.

Six years ago, the underground group Talons of Peace, determined to make the end of the war a reality, stole, bought and borrowed five eggs and began raising the young dragons in secret. Gentle-hearted Clay, the MudWing; sassy Tsunami, the SeaWing; bookish Starflight, the NightWing; loyal Sunny, the SandWing; and shy Glory, the RainWing, are the Dragonets of Destiny. After six long years in seclusion with only their history lessons and combat training for occupation and their harried minders for company, the five young dragons yearn to see what life is like beyond the thick stone walls of their cave. Escaping their prison is only a vague fantasy until the original prophet arrives and threatens the life of one of the dragonets. The five flee, only to be captured almost immediately by a ruthless dragon queen. Fast-paced and detailed, this first installment in a new adventure series is entertaining if not terribly original. Adult dragons are all cast as untrustworthy, cruel and selfish; only the young dragonets seem to have any depth and complexity. While expected, violent battle scenes seem at odds with the story of peace and quest for home. Nevertheless, this first outing has all of the key ingredients for a successful formula-fantasy series: hierarchical social structure, destiny, attributive names and a map.

Exciting, but not outstanding.