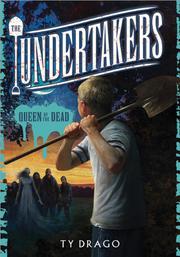 QUEEN OF THE DEAD

From the Undertakers series, volume 2

Will Ritter continues the battle started in Rise of the Corpses (2011) to protect humanity from the corpse-possessing invaders from another dimension.

When a surveillance mission provides an opportunity to unearth a Corpse plot still in development, and with the new knowledge of how to use salt to kill the interdimensional invaders, the human Undertakers can take the offensive in their war over the world. To do this, they face the titular queen, sophisticated Lilith Cavanaugh, who has replaced the late Kenny Booth as the leader of the invaders. She blends a higher level of competence with a downright savage monstrosity, posing a much more pragmatic threat than Booth did. Alternating with Will's first-person narration, chapters written in third-person that focus on Lilith reveal more about the world the Corpses come from as well as their purpose. Lilith makes the fight personal for Will and in doing so, raises the stakes. While the first part of the story drags, near the end, a switch is flipped, and the story comes to life with a daring plan. Additional ponderings on corpse theft that go beyond gross-out descriptions, as well as the clear consequences of battle and lack of adult support, give moral and emotional dimensions to the otherwise straightforward story.

Uneven, but the quality improves as the story progresses.