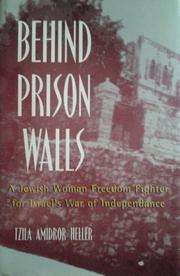 A tense, confrontational, yet moving memoir of Jewish women underground fighters and political prisoners in Mandate Palestine. Heller’s intense account of her underground activities gives one the sense that a mere handful of ferociously dedicated Jewish fighters, such as those in Menachem Begin’s Irgun, defeated the British and their Arab allies to create the State of Israel. This view is rather partisan in its portrayal of David Ben-Gurion and others in the Jewish establishment as perfidious, and the author’s unbending iron will becomes exhausting. Still, there is dramatic tension in her account of an ongoing clash of cultures between the British rulers and the Jewish freedom fighters, as seen in the political conversations she had with her jailers, interrogators, and judges. Heller, the mother of a young son, gave herself over to serving as a top organizer and fund-raiser for the Irgun and found herself imprisoned in Jaffa and Bethlehem. The details of her capture and treatment are arresting, and everything about her living conditions and legal battles is charged with the passions and political considerations of the four chief combatants: the British Mandate government, the Arabs, the Jewish establishment, and the Jewish underground. Despite its political single-mindedness, the memoir has some very human and universal moments, involving family concerns, health amid poor prison conditions, meeting up with Holocaust survivors detained by the British for trying to enter Palestine illegally. In one scene, Heller sees Begin risking capture to give aid and comfort to the elderly parents of an imprisoned activist. There is too little literature about these desperate pre-State years, so Heller’s impassioned and opinionated memoir offers a rarely heard voice in the (still ongoing) argument among Jewish factions in Israel. (8 pages photos, not seen)