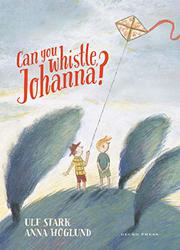 CAN YOU WHISTLE, JOHANNA?

When his friend Ulf describes the fun he has with his grandfather, Berra wishes for his own grandfather.

To find him one, Ulf brings Berra to an old folks home, where they meet Ned, and Berra introduces himself as his grandson. Ned is lonely, so he willingly accepts the relationship. They have tea with the other residents, to whom Ned proudly introduces his newly acquired grandson. At first, recalling Ulf’s tales, Berra asks Ned for money, which he gladly gives. After several more visits, Ned takes them to the park, where Ned builds a kite made from sticks and his wife’s silk scarf while speaking lovingly about his wife, Johanna, and whistling the pretty tune that is also the title of this book. Berra’s relationship with Ned grows deeper. He tries to whistle just like Ned and plans a birthday surprise for him that pleases and delights the old man. Ned tires easily and gets confused and lost, but the 7-year-olds don’t really see the ramifications. Berra waits until he can whistle before his next visit but discovers that Ned has died. In a tribute to his adopted grandfather, he whistles his favorite song for him at his funeral. In this Swedish import, the author’s namesake Ulf, who is observer, participant, and good friend, narrates the tale in a direct, matter-of-fact tone. Höglund’s deceptively simple, colorful cartoons beautifully capture the characters’ emotions and actions. Characters present white.

A sweet, tender, never maudlin evocation of an intergenerational friendship.