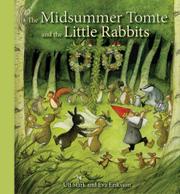 THE MIDSUMMER TOMTE AND THE LITTLE RABBITS

The gruff but large-hearted Scandinavian gnome usually associated with Yuletide takes an offseason turn when a summer storm brings a company of homeless woodland creatures to his door.

Faithfully tending to a cottage that has had no human residents for many years, the aptly named Grump faces the prospect of losing his sole companion, a wise bee met in The Yule Tomte and the Little Rabbits (2014). Meanwhile, along with talk of the coming of midsummer in the tumultuous Rabbit clan, young Binny is smitten with newly met Rory—portrayed in Eriksson’s cozy, slightly soft-focus illustrations as a bunny with significantly darker fur than Binny’s and her family’s. The idyllic opening scenes take on a dramatic cast with the wild storm, into which Rory intrepidly slogs to rescue Father Rabbit’s prized hat. A falling tree leaves Rory at death’s door, but he recovers in time to join in a joyous midsummer frolic around a maypole and, with the red-capped tomte presiding, be married to Binny. In a series of sweet closing chapters, Grump’s grumpiness is forever banished by a midsummer’s dance with a fairy, and by summer’s end there’s a pair of new little bunnies to dandle on his knees. Stark’s simple, dreamy prose and the idyllic gatherings centering on the kindly tomte seamlessly combine to create a superb candidate for reading aloud.

An engrossing episode, infused with magic and with moments light and dark as well as lots of small furry animals.