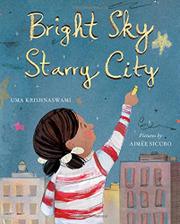 Outside her father’s telescope shop, Phoebe chalks the solar system on the sidewalk, looks up at the faint, paltry sky show, and wishes that just once all the bright city lights would go out. A sudden storm grants her wish, and the clouds clear to reveal stars in the hundreds, constellations that she “had only ever seen / in pictures,” a rare conjunction of Saturn and Mars, and the pale, gauzy Milky Way. “How deep the night was / and how endless!” Using a mix of pastels, chalks, and collage, Sicuro depicts Phoebe looking, usually, up and marveling at the spangled skies, the connected dots of constellations, and the two easily recognizable planets floating in the vasty deep. Puzzling choices include showing Phoebe peering through a telescope pointed down rather than up and lifting her arms in a final scene to a sky that looks more washed out than on previous pages. Still, views of her, her father, and wonderstruck passersby gazing up past crowded rooftops capture a strong sense of a special, shared moment. Along with a quixotic kvetch about light pollution, the author appends quick descriptions of the solar system, moons, planetary conjunctions, and optical telescopes.

A mildly agenda-driven companion to the less-cosmic likes of John Rocco’s Blackout (2011) or Jonathan Bean’s intimate At Night (2007).