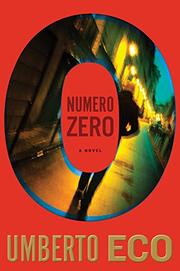 The sun is shining, the world is spinning, and the great Italian novelist and semiotician has a new book—which means that a conspiracy theory must be afoot somewhere close by.

Working territory much resembling that of Foucault’s Pendulum, Eco (The Prague Cemetery, 2011, etc.) spins a knotty yarn. The time is June 1992—meaningful to Italian readers as the inauguration of an ostensibly clean period in a notoriously corrupt politics. A hack and ghostwriter, Colonna (whose name means “column”), is long on brains if short on talent; as he says, “Losers, like autodidacts, always know much more than winners.…The more a person knows, the more things have gone wrong.” Ah, if he only knew the half of it, for just when it seems that he has no prospects left, he’s summoned to pen a memoir by a journalist who’s cooking up a Potemkin village of a newsmagazine, funded by a magnate who keeps secret the fact that Domani (tomorrow) will never actually hit the newsstand. Say what? Why write a book for a writer? Why staff a paper at much expense when it’s not really real? And why keep at it when the paper, stuffed with celebrity romances, scandal, and innuendo, is so obviously a vehicle for misinformation—and even blackmail? Those are modest mysteries compared to a larger one that implicates Italian history and society. Suffice it to say that much of the brouhaha concerns a certain baldheaded, square-jawed former dictator who brought Italy to ruin long before Colonna’s wheels ever started spinning, overlapping into the seamy sordidness of the Tangentopoli, or “bribegate,” of the narrative present. For all that, Eco draws in contemporary political figures, and dead popes, and assassination attempts, and terrorists, and banking scandals—well, it helps to know a bit about recent Italian history to keep up with what’s going on, especially when it’s often turned on its head.

But then, to read Eco well, it helps to know about everything. Not quite as substantial as The Name of the Rose but a smart puzzle and a delight all the same.