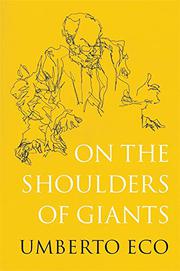 ON THE SHOULDERS OF GIANTS

Like a collection of TED talks on philosophy and literary history, these 12 dazzling texts explore grand themes of intellectual curiosity such as beauty, secrecy, the invisible, and the sacred.

Each essay was originally presented as a lecture at the Milanesiana Festival in Milan, where Eco (Chronicles of a Liquid Society, 2017, etc.) spoke yearly from 2001 to 2015. They represent “a rough and ready semiotics,” but they maintain a sense of familiarity and oral tradition that aligns the book with works like Plato’s Symposium and other ancient philosophical texts. Eco explores big ideas, some of which were prompted by the festival’s organizers, and with a staggering bibliography of sources, he playfully meanders from the writings of Thomas Aquinas to Alexandre Dumas to Dan Brown. In a 2004 lecture on the sublime, he explores the medieval understanding of beauty in terms of proportion, luminosity, and integrity, all while invoking the golden ratio and the splendor of Caspar David Friedrich’s paintings. The following year, Eco delivered a lecture on ugliness that drew on The Tempest’s Caliban, Cyrano de Bergerac, and even a bevy of grotesque Bond villains from Ian Fleming’s novels. It’s a thrill to connect ideas between lectures: Eco’s thoughts on ugliness, beauty, and kitsch return in a 2012 talk on imperfections in art and literature, where he explains, “what we look for in a work of art (at least these days) is not a correspondence to a canon of taste, but to an internal norm, where economy and formal consistency regulate the text in all its parts.” In other words, context is key. But how to contextualize this book, with its heightened erudition and limited accessibility? With philosophical citations that span pages at a time and Eco’s penchant for using the original Latin whenever he can, this book’s “internal norm” is situated in the college-level classroom or the special collections wing of a university library.

A rigorous exploration for able academics.