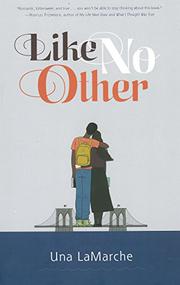 Sparks—both romantic and cultural—fly when Hasidic Devorah and Jaxon, the son of West Indian immigrants, meet on a hospital elevator stuck between floors during a hurricane.

This chance flirtation fans a tiny flame of doubt into a wildfire. Devorah knows she doesn’t want to live out her parents’ vision of the future: a highly circumscribed yet loving life of faith and family in Crown Heights, Brooklyn. Devorah begins lying to her parents and sneaking around their rules to spend more time with Jaxon, falling for him hard and thinking that a relationship with him would help her avoid entering an early, arranged marriage and inevitable motherhood. But her suspicious, holier-than-thou brother-in-law, Jacob, seems intent on catching Devorah in the wrong. Meanwhile, Jaxon thrills to the romance of their shared secret, laboring over a heartfelt mix CD and devising detailed plans for a date that won’t break the rules of sabbath. The novel is by no means perfect: Jacob’s villainy is positively clichéd, and the number of factual missteps throughout (by tradition, Devorah would not have been named for a living grandmother and would never call that grandmother a shiksa, for example) render the narrative troubling and unreliable. The story is most successful in the scenes between the protagonists and their respective families, which readers will note are more similar than they are different.

A highly readable though flawed twist on the classic star-crossed lovers plot.