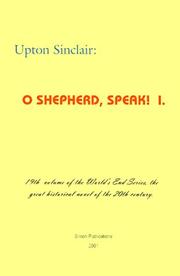 This the tenth- and the author expresses his hope, the last —of the Lanny Budd series, brings the adventures of the presidential agent through the war crimes trials, the conflict- diplomatically speaking- with the Soviet, and finds him at the end in a position of trust with the new administration, sent to Moscow as Trumen's personal representative. The first half of the book is, as in previous volumes, set against a background of reality, with Lanny serving in a very special relation with Monuments, — sent into all parts of Europe as the occupation troops take over, to interrogate Germans who might help locate art treasures, accompanying some of the important survey expeditions, using his previous contacts as a bona fide art expert and advisor to the German leaders to worm facts from these very leaders as prisoners. He was caught in Bastogne; did signal service there and in Nancy and Luxembourg, in Munich and Nuremberg. From Europe to America and back- now at the summons of Roosevelt, now of the army. His intimate relations are, presumably, established by use of such nicknames as "Georgie" (Patton), a habit rather irritating to this reader! Lanny Budd addicts will welcome tying up loose threads as lost personalities are found- old friends reintroduced, — Monck, Hansi and Bess, Freddi Robin, Marceline, Rick (now a baronet, but still set on world betterment) and Nina his wife. Emily Chatterton has died, willing a million to Lanny in trust for world peace. And the development of this idea, with various ramifications (radio, syndicate, newspaper, authors' agency, etc.) provides the fictional last half of the story. There are bits here and there linked closely to history. Lanny is present at Los Alamos, for the important text. But in the main, his story shifts from men of action to men of ideas, so this is considerably less melodramatic in the personal sense than its predecessors. Will that decrease its market? I doubt it, for the Lanny Budd fan will go through with him to the end.