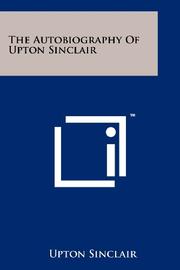 THE AUTOBIOGRAPHY OF UPTON SINCLAIR

This is Upton Sinclair's protest to the world signifying that he is still very much alive. One of the original muckrakers in the days of the other Roosevelt and contributing to Americana from this standpoint, Upton Sinclair tells us his story from the perspective of 83. From these pages much emerges as feebleness but those lines concern dimmed recollections of worlds past and not that of Sinclair himself. This is an intellectual's book dealing with one who made intellectual history, and no self-respecting intellectual tradesman will fail to read it. For this is the prodigious writer of hundreds of novels, plays, homilies, diatribes and pamphlets the man who discovered the Jungle in Armours Meat Industry at 28; who founded a Utopian cooperative in 1908 (where his admirer Hal Lewis took both his name and his Socialist politics and began his flight from Babbittry); and who muckraked through all America to become the finest and most devoted polemicist this country has seen. He authored a historical panorama of politics in his Lanny Budd series with as much dedication as he ran for Governor of California in his epic plan to save America in 1934. There are no characters in this autobiography, least of all himself. Nor is there insight into the great men with whom he shared his life. He fails to give us his personal story or his view of life in depth. All he has for writing tools is his propagandist's pen. And that is the way he tells it. The facts can be had from a literature class and Sinclair does not embroider. Yet this is a great man with a mediocre hand. The autobiography pulses with his greatness. The best polemicist of our time protested so well that every writer, of every shade, in America is still indebted to him for his struggle with the publishing world. This protest of life, at 83, telling many generations that Upton Sinclair is still among us, will be read more deeply than it was written.