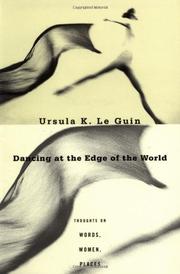 DANCING AT THE EDGE OF THE WORLD

A very mixed bag indeed, comprising 36 talks and essays (1976-88) and 17 reviews (1977-86), ranging from travel pieces and literary discussions to feminism, commencement addresses, and social-consciousness-raisers. Nonfictional Le Guin is not an easy writer to grapple with: her style veers from mercurial and eclectic through straightforward and banal to wholly elusive. For instance, the essay discussing her famous novel The Left Hand of Darkness ("Is Gender Necessary?") tends to dodge the real issue; a "redux" presented here alongside the original essay clarifies some points but elsewhere muddies the waters still further: in fact, the novel is its own testament, perhaps above interpretation. Essays on narrative, character, and storytelling do good work breaking up old, misogynous categories, only to delineate new, albeit feminist, ones ("The Carrier Bag Theory of Fiction," "Heroes," etc.). The travel pieces often pique the interest without breaking any new ground. The reviews, too, suffer from similar encumbrances. Le Guin demolishes Star Wars and Close Encounters as both science fiction and film (an all-too-easy task) without explaining or even acknowledging the movies' vast popularity. Again, she savages C.S. Lewis—he's in a mode where he thoroughly deserves it—but only by comparing him to J.R.R. Tolkien, whom she uncritically admires. Le Guin's unabashed feminism can be an eye-opener, and much of what she has to say is eminently sensible and often penetrating. But all too soon she'll wobble off toward terra incognita, leaving her readers floundering, bored, or frustrated in her wake. Her often brilliant fiction scores higher by setting aside the didacticism.