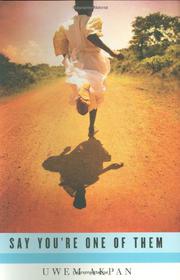 SAY YOU’RE ONE OF THEM

Redemption is in short supply in these five stories by a Nigerian priest about children caught in the crossfire of various African countries’ upheavals.

The opener of this debut collection, “An Ex-mas Feast,” is one of the more upbeat entries—which isn’t saying much, since its eight-year-old narrator describes sniffing shoe glue to ward off hunger in a Nairobi shanty town while his 12-year-old sister proudly moves from street prostitution to a brothel. In “Fattening for Gabon,” a morbid variation on Hansel and Gretel, an uncle literally fattens up his nephew and niece to sell them into slavery. Although he genuinely loves them, his repentance comes too late and with not-unexpected tragic results. The least arresting story is the slight and familiar “What Language Is That?” Their families profess liberal, inclusive attitudes, but a Christian child and her Muslim best friend are prohibited from communicating when rioting breaks out in Addis Ababa, although the girls do find, perhaps briefly, “a new language.” That miniscule glimmer of hope for humanity disappears in “Luxurious Hearses,” an emotionally exhausting encapsulation of the devastation caused by religion. Baptized as an infant by his Catholic father, raised in a strict Muslim community by his mother, adolescent Jubril is targeted by extremists who happen to be his former playmates. Fleeing religious riots in northern Nigeria on a luxury bus full of Christians, he keeps his right wrist in his pocket; if they see that his hand has been amputated (for stealing, under Sharia law), they will know he is Muslim. Jubril comes close to finding acceptance among his fellow passengers, which only makes their ultimate violence against him that much more disturbing. The final story, “My Parents’ Bedroom,” goes beyond disturbing toward unbearable as the children of a Tutsi mother and Hutu father in Rwanda witness the unspeakable acts their decent parents are forced to commit.