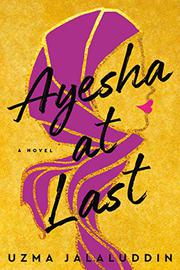 A smart young Muslim Canadian woman navigates the complexities of career, love, and family in this lively homage to a Jane Austen classic.

“While it is a truth universally acknowledged that a single Muslim man must be in want of a wife, there’s an even greater truth: To his Indian mother, his own inclinations are of secondary importance.” With that nod to Pride and Prejudice firmly in place, Jalaluddin lays the groundwork for a raucous story that mixes a zany cast of characters with a tightly wound plot. The “single Muslim man” in question is the handsome Khalid Mirza, who’s hiding behind a long beard and loose-fitting traditional clothes. Unlike his Muslim colleague, Amir, Khalid refuses to “edit” his identity by shaving or wearing jeans and is therefore unfortunately typecast even, at first, by his ravishing neighbor, Ayesha Shamsi. The 27-year-old Ayesha, focused on her teaching career and moonlighting as a poet, doesn’t have time for “fundy” Khalid, but, predictably, their paths keep intersecting. Khalid is a mama’s boy, though, and will do what she says when it comes to marriage. As a series of unfortunate events plays out, it becomes increasingly clear that there is more to both Khalid's and Ayesha’s stories. What happened to Khalid’s sister? Why does Ayesha feel beholden to her young and pretty cousin, Hafsa? Jalaluddin expertly works in a healthy number of parallel plotlines and keeps the reader invested in the final outcome. The ending might be predictable (this is Pride and Prejudice lite, after all) and a few peripheral characters feel one-dimensional, but all is forgiven as the story races along to its gushy and adorable wrap.