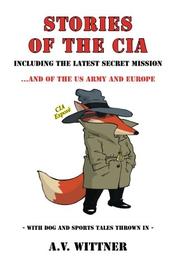 STORIES OF THE CIA

An assemblage of personal remembrances focuses on the author’s career in national security.

Wittner (Three Dogs, Some Satire, a Girl and Europe, 2009) devoted four decades of his life to national security work, some of it in the governmental sector, some of it in private consultation. Much of this memoir—more a series of impressionistic vignettes than a linear autobiography—covers his career, including his travels through Europe. Most of the anecdotes—informally related in a conversational, jocose tone—are very brief and are explicitly designed to deliver lighthearted entertainment. For example, Wittner attended a wedding of two young socialists, and the groom’s father was a high-ranking CIA official. The guest list was studded with other intelligence officers, all there to witness the ceremony’s officiant advocate the government’s revolutionary toppling. But the author doesn’t restrict his reminiscences to professional life; he also discusses his love of fishing, his undying affection for his dogs, and his brief baseball career at Cornell. There is also plenty of meandering commentary, including grouses about the state of contemporary journalism and the running of the bulls in Pamplona. In one of the longer recollections, he tells the intriguing story of a teenage girl whom he helped leave Poland for the United States to continue her education and the unusual friendship that formed between the two of them despite an age difference that spanned decades. In a satirical essay on American democracy, the author proposes a new electoral system that unevenly distributes voting power, with libertarians wielding the most and the hypereducated and hyperreligious the least. Wittner is charmingly unpretentious, and he has an attentive eye for the comically absurd. In addition, his career was a genuinely memorable one. The best of his reflections come in the form of minitravelogues, chronicles of foreign cultures straining at the seams. For example, he provides an incisive look at the tension between Poland’s youthful ambition to embrace modernity and a traditionalist impulse to chasten progress. But the prose can slide from unfussy into slapdash; in a prefatory note, the author confesses to an impatience with both editing and punctuation.