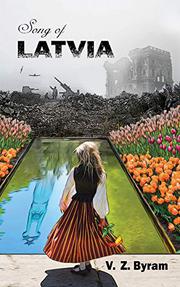 A debut historical novel focuses on the plight of Latvians during World War II.

It is 1940 and some 8,000 people in Latvia are supposed to be singing as part of the annual Song Festival in Daugavpils. But the singing is delayed because President Kārlis Ulmanis has an important message: Soviet troops have invaded the country. When a woman named Mija Adamsons hears this news, she immediately thinks of her husband, Aleks. Aleks is a colonel in the Latvian army. If Latvia is to be engaged in military operations, her husband will surely be involved. Mija rushes to her home in the countryside where she later learns that Latvia is to become a Soviet republic. While Aleks resigns from the army rather than fight alongside the Reds, this is only the beginning of some difficult years for the couple. The Soviets quickly seize power; religion is banned; and many Latvian citizens are arrested. As conditions for people like Mija gradually worsen, there is a glimmer of hope on the horizon. If the advancing Germans can drive out the Russian invaders, perhaps things won’t be so bad. Yet once the Nazis arrive, it is hardly a cause for celebration. Byram’s story deftly illustrates the sheer terror in Latvia during World War II. How could anyone survive the horrors brought on by these two merciless forces? At one point, Mija feels like she is “imprisoned in an ice tomb.” Aleks, with his military background, comes to realize the sheer madness of the atrocities committed by the Germans (“He understood war, at least he thought he did, until now”). While such sentiments are hardly exaggerations given the circumstances, other details can be more obvious than instructive. Most of the story’s characters tend to express their exact feelings without much room for ambiguity. One man asserts rather unhelpfully that “it’s so difficult to find out anything these days.” Since Latvia is, of course, a contested land during World War II, could readers expect anything less? Nevertheless, even if some facets of the book lack complexity, the author skillfully paints the magnitude of the conflict in all its striking colors.

An authentic and tense portrait of everyday people dealing with war.