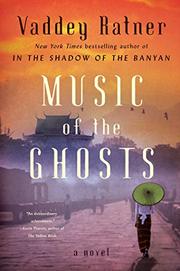 MUSIC OF THE GHOSTS

Ratner (In the Shadow of the Banyon, 2012), a survivor of the Khmer Rouge years in Cambodia, has written a novel-length smot, a form of "poetry sung in honor of loved ones, living or dead."

As in two other recent novels concerning life under communist regimes—Elizabeth Kostova’s The Shadow Land, about Bulgaria, and Madeleine Thien’s Do Not Say We Have Nothing, about China—music is central to this tale. In 1979, 13-year-old Suteera and her aunt Amara escaped Cambodia, the only members of their family to survive. Despite the comfortable lives they achieve in America, Suteera, now called Teera, remains haunted by the mystery surrounding her father’s early disappearance. After Amara’s death in 2003, 37-year-old Teera flies to Cambodia to visit Wat Nagara, a Buddhist temple where her aunt bequeathed a memorial to all who perished during the Khmer Rouge years. Coincidentally, Teera has recently received a letter from a stranger offering her musical instruments he claims her father gave him while they were imprisoned together. The stranger is Tun, a former musician weighed down by enormous guilt over choices he made during the war years and deep grief over the daughter he lost. Now poor and disabled, he lives at Wat Nagara, where he heard about Teera from the abbot. Teera and Tun’s awkward first meeting stirs up memories for each. Meanwhile Teera begins a love affair with Tun’s friend Dr. Narunn, a former novice monk who runs a medical clinic. Also orphaned during the war years, Narunn chooses to embrace life despite his difficult past. The novel is organized in three movements: the first is a careful exposition of grief and unresolved remorse as themes; the fast-tempoed second covers a period of months as the characters interact with each other while remembering individual pasts of “so much cruelty, so much generosity”; the third resolves the initial themes while attaching hope—for the human characters and possibly Cambodia, Ratner’s true central character.

Lush with tropical heat and heated emotions, this is no easy read but impossible to put down.