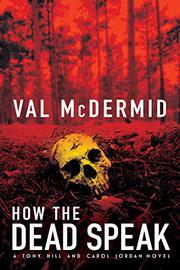 HOW THE DEAD SPEAK

Sidelined in very different ways since their last collaboration ended so disastrously for them both, DCI Carol Jordan and psychological profiler Dr. Tony Hill are reduced to subplots as the Regional Major Incident Team founded by Carol plows on under DI Paula McIntyre.

To bring readers who skipped Insidious Intent (2017) up to speed: Tony’s now in prison for manslaughter, and Carol’s no longer with the Bradfield Metropolitan Police. Tony, who refuses to see Carol because he wants to spare her more anguish, is pressured by Vanessa Hill, his monstrous mother, to get Carol to hunt down Harrison Gardner, the Ponzi artist who made off with her life savings. Vanessa doesn’t want anything as old-fashioned as justice; she just wants her money back. But even though she’s unemployed and barely holding things together, Carol’s time turns out to be unexpectedly valuable. Defense solicitor Bronwen Scott, with whom she’s crossed swords many times before, wants her to work with After Proved Guilty, an innocence project Bronwen’s launched, to exonerate Saul Neilson, who’s three years into a sentence for murdering Lyle Tate, a gay sex worker who vanished after his last appointment with Saul and is presumed dead. Such is McDermid’s generosity in plotting that neither of these cases is the main course here. That would be the discovery of some 30 unmarked graves on the grounds of the former St. Margaret Clitherow Refuge and School, which, until it closed five years ago, was under the iron control of Sister Mary Patrick of the Order of the Blessed Pearl. As Paula and her ReMIT squad work the case, they confront layer upon layer of unctuous professionals and religious whose sole emotion seems to be abstracted annoyance that their coverup is coming undone. Little does the squad know that there’s even more to cover up than they’ve bargained for.

A vast, absorbing smorgasbord of crime, malfeasance, and corruption that ultimately has no more momentum than most bountiful buffets.