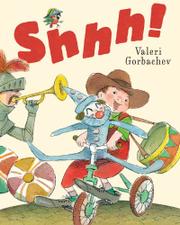 Gorbachev charms in this salute to naptime.

“When my baby brother sleeps, I am very quiet.” But the young narrator also does his brotherly best to quiet other noisemakers. There is that clown whooping it up and the knights fighting and the plane buzzing and the train clanking and the pirates firing their cannons. “Shhh!” says the boy to each. But when baby brother wakes—drawn here by Gorbachev with a wonderful, round head and gaping maw, much in tune with the knight’s potato nose, the pirates’ bristly cheeks and the conductor’s walrus of a mustache—all the various characters can get back to business, only this time as the young boy’s toys. Gorbachev recreates the powerfully evocative atmosphere around naptime—the sepulchral hush, the strange amplification of the most minor sounds; readers can almost taste the afternoon’s doldrums. His drawings are both delicate and taut: The lines are fine, and the colors are like a blush, while the various characters have been caught in mid-act, now frozen but ready to move when the word is given.