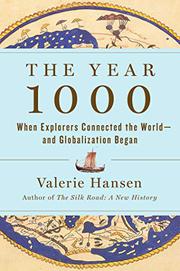 If any reader still believes that the year 1000 marked the Dark Ages, this insightful history will set them right.

Though Hansen (Chinese and World History/Yale Univ.; The Silk Road: A New History With Documents, 2016, etc.) pays some attention to the politics, religion, and culture of the era, she focuses on commerce, making a convincing case that this date “marked the start of globalization…when trade routes took shape all around the world that allowed goods, technologies, religions, and people to leave home and go somewhere new.” For commerce to circle the globe, traders had to reach the New World, which happened around 1000, although no one knew it at the time. As befits that era’s greatest explorers, Hansen begins with the Norse, who, after centuries of raiding around Europe and the Mediterranean, sailed to Iceland, then Greenland, then North America, where later chroniclers and recent archaeological evidence (plus the usual fakes) indicated their arrival around 1000 and some trading but no permanent settlement. Less known but far more significant, the Norse also battled their way east. Known by the locals as “Rus,” by 1000, they had reached the Caspian Sea, adopted Christianity, and laid the foundation of Russia. Despite the nearly complete absence of writing, when Columbus reached America in 1492 and Islamic slave traders penetrated Africa well before 1000, they found complex cultures with well-established trade routes. Hansen then moves on to the flourishing, prosperous, technically advanced Middle East, India, and Southeast Asia, ending with superpower China, the center of a massive trading system stretching from the Indies to Arabia and Africa. The author covers a vast amount of territory in a concise, readable manner, making for a welcome contribution to the popular literature on early global trade and geopolitics.

A thoroughly satisfying history of a distant era and people.