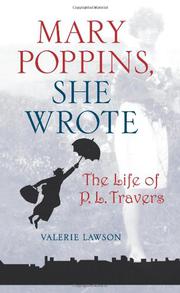 The Life of P.L. Travers

The Disney film based on Travers’s well-loved flying English nanny was not made until 1963, 30 years after Mary Poppins was originally published. Here, Lawson uncovers Travers’s various disguises. Born in Maryborough (Queensland) in 1899, Helen Lyndon Goff absorbed fanciful stories and poetry told by her English-Irish father, a banker who drank heavily and was eventually demoted from bank manager to clerk. With his death, Travers fell under the supervision of her stalwart spinster aunt, Ellie, in Bowral (New South Wales), and our smart young heroine, known then as Pamela, eventually set out for Sydney with the short-lived plan of making her name as an actress. Travels to England and Ireland whetted her appetite for becoming a writer, and correspondence with George William Russell, “AE,” the older married editor of the Irish Statesman, had both romantic and literary implications. AE introduced her to Yeats and encouraged her to publish; her first stories about the Banks children and their dictatorial, magical nanny Mary Poppins first appeared in 1926. Travers traveled extensively as a journalist and seems to have latched onto older, powerful male figures all her life: Besides AE, there was Alfred Richard Orage, Armenian guru G.I. Gurdjieff and Irish critic Francis Macnamara. Travers wrote her many Mary Poppins adventures over the course of 54 years, with delicate drawings by Mary Shepard; with Disney's film adaptation, Travers became a rich woman, though not a famous one. Her adoption of a Dublin twin, Camillus, allowed her finally someone to “love and control,” and she settled comfortably into the role of New Age disciple. She died in 1996.

Lawson ably encompasses the life of this mysterious, many-sided author, from nymph to mother to crone.