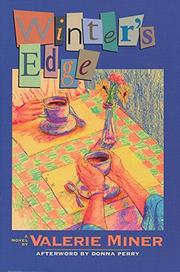 As in her other novels (Blood Sisters, 1982) Miner leans heavily on a feminist/ideologist message, with the good guys (homosexuals, minority members, the sexless and defeated) and heroines (a black politician, middle-aged prostitute/waitress, two elderly women) running smoothly--and predictably--on their one-track destinies. Set in San Francisco's 1979 slum/ Tenderloin district, this is the tale about two women in their 70s and the trials that test their friendship. Widowed Margaret--one child dead in Vietnam, the other two living away--works in a news shop owned by sad widower Douglas, who detests his ""wimp"" of a son, Kevin. Margaret loves her work, her ""community,"" and the visits from pals like Hispanic Roberto, gentleman homosexual Ernie, policeman Charles. Margaret is surely a ""lady,"" thinks her best friend Chrissie, with some asperity. Chrissie is a Scots/American activist, and she ain't a lady perhaps, but she has feelings--after the murder of her Indian lover in Scotland years ago, she keeps to herself. Meanwhile, Chrissie is toiling full time for the election of progressive black lawyer Marissa, whom she met ages ago at a Civil Rights march. In a local election, Marissa is opposing big-time developer Jack Carson, who'll drive out the lowly with Hiltons and high rents. As violence erupts, Margaret is an innocent courier of Carson money; she and Chrissie air their differences in attitudes toward political involvement; and Chrissie is digusted with Margaret's affair with the Rev. Roger Bentman (that ""fuzzy liberal"" of a Unitarian minister) and Margaret's demeaning ""eternal search for the holy male."" The danger to Margaret and Chrissie causes the perpetrator to blow his cover; Douglas and Kevin forge a kind of tie; Ernie walks out with Charles; and Margaret, leaving Roger, is off to Hawaii with Chrissie, although knowing full well that Chrissie'll be manning barricades there too before long. Miner's streetscapes, with innards of news shops and 24-hour diners, are convincing as are the two friends' complementary relationships, but not much else is. However, with publicity boosts from some leading feminist writers, there's bound to be a waiting, predictable readership.