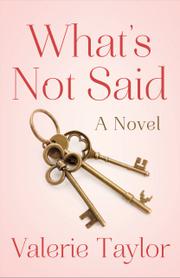 A young woman must choose between old loyalties and a new beginning in Taylor’s debut novel.

Kassie O’Callaghan is a successful 54-year-old marketing executive with a knack for details, which has served her well during her long and admirable career. Now, she’s using her gift to orchestrate a very different kind of project: divorcing Mike Ricci, her husband of 30 years. After years of dealing with Mike’s emotional abuse, she’s finally had enough. But just as she’s about to take the leap, she gets some disastrous news—Mike has been diagnosed with chronic kidney disease. The news throws her emotions into confusion and complicates her plans to move in with Chris Gaines, a younger man she met while traveling in Venice, Italy. After she postpones her divorce and her other future plans, she comes across clues indicating that Mike may be deceiving her. Kassie eventually faces an impossible decision that might ruin her chance at happiness. Taylor’s dialogue is snappy and contemporary, and the book reads like a fun romantic comedy at times, despite the rather heavy subject matter. Kassie’s inner monologues occasionally provide humorous insights into her personality; when speaking with a doctor involved in her husband’s case, for instance, she thinks to herself, “Oh, that’s reassuring. Let’s suspend with the pleasantries already, shorty, and tell Bad Kassie what’s going on.” The chapters move along briskly without skimping on the finer points of the plot, and there’s even a Spotify playlist and book club discussion questions at the end for those who may be looking for a deeper reading experience. Secondary characters add intriguing layers of complexity to the story, and each plays a role in influencing Kassie’s decisions. The protagonist’s inner struggle feels genuine and heartfelt, and anyone who’s lived through a divorce will find it easy to relate to her.