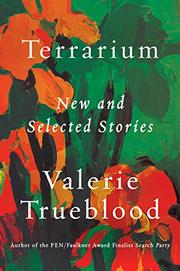 A new collection from one of our finest short story writers, preceded by condensed versions of her last three books.

The assumption must be that, despite the prize nominations, critical picks, and good reviews, most readers have missed Trueblood's last three books and that her latest is insufficient to win them on its own. Because why else would her new collection be published as the fourth element in an omnibus of selected stories from each of its predecessors, all of which were relatively recent (Criminals, 2016; Search Party, 2013; Marry or Burn, 2010)? The problem is that since "Terrarium"—this is the name of the section of new stories within the book—contains a fair amount of flash fiction and stories that require a lot of attention and mulling from the reader, the publisher is not doing it any favors by sticking it at the tail end of a collection of the strongest (and, among them, the longest) stories Trueblood has ever written. There are indeed some great stories here, praised for their unsettling combination of empathy and ruthlessness, for their elegant, uncommonly quick development, for their diverse, unexpected subject matter. Stories like "Invisible River" and "Sleepover" doubtless deserve the widest possible audience. As for the grab bag of pieces in "Terrarium," it's hard to know how they would seem if they were not read at the tail end of the line. Trueblood's interest in calamity persists—kidnapped babies, battered wives, terminal diseases. And she is still a cleareyed and compassionate reporter of the complexities and contradictions of human nature. Maybe if the collection had been allowed to become a book on its own the short pieces would seem less like fragments. Trueblood has had an unusual career, having first published at age 60. Nonetheless, what seems intended to be a "rediscovery" feels a little rushed.