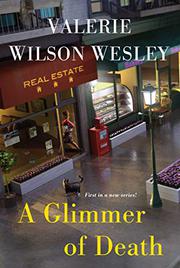 A GLIMMER OF DEATH

The creator of Newark private eye Tamara Hayle dials back the wisecracks and bumps up the paranormal hints to launch a new series featuring a widowed African American realtor whose workplace is a hot mess.

Losing her husband and their baking partnership, D&D Delights, a year ago was a double blow to Odessa Jones. Her job with Risko Realty in the fictional New Jersey suburb of Grovesville hasn’t begun to make up for her losses; as her boss, Charlie Risko, constantly reminds her, she has yet to sell her first house. On the plus side, she has second sight. To the frustration of her Aunt Phoenix, the “glimmer girl” who’s her authority on all things extrasensory, Dessa hasn’t learned to manage her gift. But it does seem that when she smells nutmeg, as she does one day at the office, death is in the air—in this case, the death of Charlie Risko, shot with the gun he was always playfully waving at his agents. There’s no lack of suspects, since Charlie was a tough man to like, and his much younger widow, Tanya, shows up at his memorial service with an array of bruises. The local cops, finding young realtor Harley Wilde’s fingerprints on the murder weapon, promptly arrest him, but Dessa can’t believe he’d pull the trigger despite his bouts of PTSD. Dessa’s no better an amateur sleuth than she is a paranormal conduit, and justice isn’t done until after two more of her colleagues die.

Less detection than baking—but the baking is nearly as urgent as in Mildred Pierce.