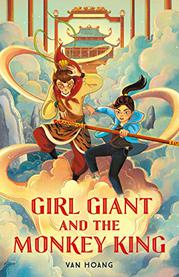 GIRL GIANT AND THE MONKEY KING

Desperate to get rid of her abnormal strength and live a normal life, Thom turns to the trickster Monkey King for help.

Somehow, Thom Ngho has become incredibly strong. Strong enough to break windows and doors, strong enough to kick a soccer ball right through the goal’s netting. She has no idea how this came about or how to put an end to it, so she hides her powers, letting her soccer coach bench her, which is better than the alternative. To make matters worse, her mother has suddenly moved them from their home in California to Georgia, where Thom is the only Vietnamese American kid in a mostly White school. When the Monkey King appears in her bedroom one night, Thom realizes that the stories she heard growing up—about Monkey, the Boy Giant, and more—may really be true. With the dubious help of the Monkey King and a dragon who claims to be her protector, Thom sets out on a journey through Vietnamese folklore and mythology while simultaneously juggling school life and her relationship with her mother. Spinning a fantastic tale of adventure, humor, and mischief, Hoang also incorporates portrayals of racism, belonging, identity, and intergenerational differences that ring true, crafting a fantasy for the modern age with enough complications to hint at more to come. Charming spot art enhances the wonder of the fantasy elements.

At its core, a tale of magic and family strongly grounded in contemporary reality.