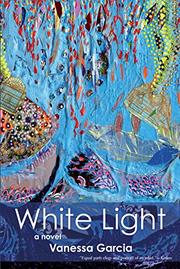 A young painter on the verge of success is waylaid by the sudden death of her complicated father in this debut novel.

Veronica Gonzalez is ready to be finished struggling through her painting career. But after a brief business trip to New York City—a place she left long ago, unable to cope with its excesses—she finds herself on the cusp of a big break and a shift in her luck: she’s being offered solo exhibition space at Art Basel, a major festival for contemporary work. Upon returning to Miami, where she lives with her tepid boyfriend, her father is found near death in his apartment. After he dies in the hospital, Veronica is paralyzed by her loss, terrifying her art dealer and threatening her prospects, but then she begins to pour her emotions into her work, pulling physical and emotional reminders of her father’s life, mistakes, and legacy into a massive art piece. Once this project begins, the novel’s chapters are titled with paint colors—Payne’s gray, hunter green, orange—and the subsequent memory or scenes revolve around that theme, sometimes literally, sometimes more loosely. This formal conceit is a risky move, in that it only emerges partway through the novel, but it succeeds, giving the reader a hauntingly fragmented portrait of a woman trying to pay homage to and be honest with herself about her father’s great love and cruelty and the nuance of her heritage. Veronica’s story is a relentless engine, told in rich, smart prose and lucid detail—equal parts elegy and portrait of an artist.

A lush, vibrant portrayal of the creative process, a daughter’s love, and the unstoppable maelstrom of grief.