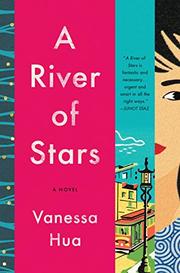 A RIVER OF STARS

A pregnant Chinese woman goes on the run in America to escape her controlling ex.

Scarlett never imagined she would find herself somewhere like Perfume Bay, a posh private accommodation for expectant Chinese mothers in Los Angeles. But when she gets pregnant with her boss’s baby, and that baby turns out to be a boy, everything in her life changes in an instant. Boss Yeung will take no risks with the son he’s always dreamed of…even if that son is illegitimate. Scarlett, who is used to working in factories and fending for herself, is not prepared for life among the pampered women at Perfume Bay who have come to America to secure citizenship for their children. When she finds out that Boss Yeung wants to pay her to give her baby up to his legitimate family, she finally decides to take her life back into her own hands and escape the claustrophobic Perfume Bay. But she doesn’t anticipate being accompanied by Daisy, a spunky and occasionally obnoxious teenager whose parents sent her away when she got pregnant with her beloved boyfriend’s baby. The two women escape north to San Francisco’s Chinatown neighborhood, where they scrounge together food and money for themselves and their newborns—all while Boss Yeung gets closer and closer to tracking Scarlett down. This debut novel from Hua, who has previously published a collection of short stories (Deceit and Other Possibilities, 2016), paints a vivid picture of Scarlett and Daisy’s unromantic and occasionally squalid, but nevertheless vibrant, life in Chinatown. Scarlett’s fear of being discovered by Boss Yeung never fully dissipates, but it is ultimately overtaken by her fear of being discovered by American authorities who could deport her, and her constant paranoia is palpable. Unfortunately, the novel never fully capitalizes on its strengths. Boss Yeung’s narrative is tedious, and Scarlett’s lacks momentum. And the novel’s saccharine ending undercuts its atmospheric successes.

A 21st-century immigrant story that, while intermittently intriguing, falls short of its potential.