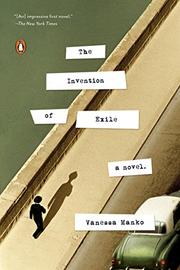 THE INVENTION OF EXILE

A man separated from his family for years reckons with his isolation in Manko’s debut, a superb study of statelessness.

In 1920, Austin (born Ustin) Voronkov was a Russian immigrant working as an engineer in Connecticut, married to an American woman and preparing to raise a family. But the Russian Revolution prompted a wave of red-menace paranoia in the United States, and Austin is deported after he’s bullied into saying he’s an anarchist. By 1948, when much of this novel is set, he’s living alone in Mexico City and scraping out a living doing odd-job repairs for the locals. His wife and three children, whom he hasn’t seen in 14 years, are back in the States, while Austin is all but drowning in the paperwork he believes will secure him passage out of Mexico: letters to ambassadors and legislators and patent applications for inventions he’s only dimly aware are outdated. A story framed around so much waiting and bureaucratic listlessness ought to feel drab and slow, but Manko brings plenty of energy to this tale. That’s partly due to the fact that she cannily shifts back and forth in time, recalling the fleeting moments of joy and togetherness Austin had, particularly a brief stint in Mazatlan running a lighthouse. (A bit metaphorically unsubtle, perhaps, but Manko uses light and glass metaphors in rich and complicated ways throughout the book.) Just as important, Manko is a tremendous stylist, using clipped, simple sentences to capture Austin’s mindset as his confidence in escape erodes but never entirely fades; Manko’s shift in perspective toward the end of the book reveals just how much the years of exile have weathered him. She deeply explores two complicated questions: What is the impact of years of lacking a country? And how much does this lack reside in our imaginations?

A top-notch debut, at once sober and lively and provocative.