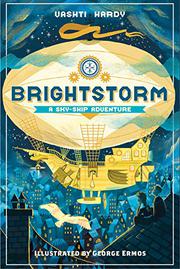 From the Brightstorm series, volume 1

Orphaned twins, an adventurer dad lost to an ice monster, and an airship race around the world.

In Lontown, 12-year-old twins Arthur and Maudie learn that their explorer father has gone missing on his quest to reach South Polaris, the crew of his sky-ship apparently eaten by monsters. As he’s accused of sabotage, their father’s property is forfeit. The disgraced twins are sent off to live in a garret in a scene straight out of an Edwardian novel à la A Little Princess. Maudie has the consolation of her engineering skills, but all Arthur wants is to be an adventurer like his father. A chance to join Harriet Culpepper’s journey to South Polaris might offer excitement and let him clear his father’s name—if only he can avoid getting eaten by intelligent ice monsters. Though some steampunk set dressing is appropriately over-the-top (such as a flying house, thinly depicted but charming), adaptive tools for Arthur’s disability are wonderfully realistic. His iron arm is a standard, sometimes painful passive prosthesis. The crew adapts the airship galley for Arthur’s needs, even creating a spiked chopping board. Off the ship, Arthur and Maudie meet people and animals in vignettes that are appealingly rendered but slight. Harriet teaches the white twins respect for the cultures they encounter on these travels, though they are never more than observers of non-Lontowners’ different ways.

A kid adventurer with a disability makes this steampunk offering stand out.