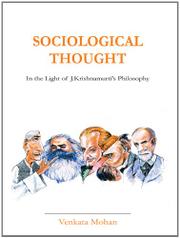 In the Light of J. Krishnamurti's Philosophy

An Eastern writer describes, analyzes and critiques Western sociologists, thinkers and philosophers from the past and present.

Mohan’s book provides an overview of ideas, beliefs, concepts and theories from some of the most prominent sociological thinkers of the Western world. The summaries of each thinker’s ideas are presented clearly enough, but sometimes the coverage is uneven. The author is unabashed when stating Marx’s prominent place in such texts and offers Marx much more coverage than Durkheim, Comte, Weber and Parsons. Relative contemporaries, such as Mills and Goffman, are given even less attention. It is apparent that theorists such as Freud and Jung are covered less since their realm is more psychological, but the disproportionate coverage of the sociologists seems arbitrary. But considering the number of thinkers covered, this variation of coverage becomes acceptable. The descriptions of thought are often followed by Mohan’s evaluation of that thought, but the evaluations are not significantly distinguished from the descriptions, which makes it occasionally hard to differentiate between strict interpretation of a specific sociologist and Mohan’s impressions of that sociologist. The reader might also be at a loss to determine the context and validity of any such evaluation since the author doesn’t seem to be formally trained in sociology (cited references and notes are from secondary sources and not the sociologists’ original works). The text is occasionally punctuated by some quirky, if not odd, comments, such as Parsons not being able to make it to heaven. This quirkiness, however, is not necessarily a drawback. The many cartoons and caricatures throughout the book underscore the author’s intellectual but wry approach. The suggested audience of reviewers of sociological thought or philosophy is fair enough, especially for those more interested in abstract writing. Mohan often offers concrete examples for such abstractions, but the text’s intention is not modern-day empiricism. Discussion of recent research is not included, so readers interested in this aspect might be better served with various academic texts.

A secondary source primer that simply, but fairly, reworks previous analyses and critiques.