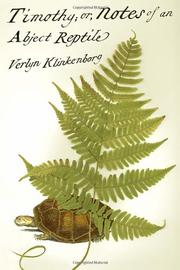 or, Notes of an Abject Reptile

A dazzling riff on human beings and their weird ways “written” by an 18th-century tortoise that lived for years in the garden of English naturalist/curate Gilbert White and appeared in White’s The Natural History of Selborne (1789).

The shell of the actual Timothy now resides in a London museum and once covered a female, not a male (as White had mistakenly concluded). The Timothy that Klinkenborg (The Rural Life, 2002, etc.), a member of the editorial board of the New York Times, imagines is a fascinating creature with a brisk prose style (many short, sharp sentences and fragments) and significant observations about how we humans look, act and think. Timothy is troubled by the determination of the English to manicure and control the countryside (his single “escape” is prompted by his desire to find a place where he can “live in the ancient disorder of nature again”). He ponders our insistence on classifying the natural world, and he is puzzled by our gait, our failure to recognize that we are animals, our short lives, our burial practices, our clothing, our religion and our sex acts. On virtually every page is a phrase or sentence that entertains or amuses or informs. (“A tortoise,” he says, “lives even longer than a bishop.”) Timothy recognizes that we are a dangerous species: “The worst of their character,” he says of us, “so often prevails.” He expatiates upon chelonian sex and observes that reptiles present “no pretense of fidelity” the way humans do. He wonders about war, about our belief that the world exists for our use alone, about our fear of death—and our fear of life.

Timothy the tortoise is a splendid social critic, a keen-eyed anthropologist who sees far beyond his shell.