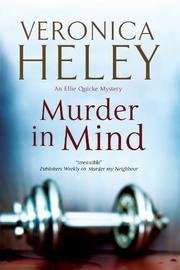 Ellie Quicke (Murder My Neighbor, 2011, etc.) takes a break from redecorating to help the family of her daughter’s fiance escape death.

Now that her husband Thomas’ family is due to arrive from Canada in a scant two weeks, Ellie dithers over how to house them in the rambling mansion she inherited from her Aunt Drusilla. But her musings over whether to mend or replace the dining room drapes are interrupted by her daughter Diana’s announcement that she’s pregnant with Evan Hooper’s child and plans to wed the real estate mogul as soon as he can shake loose of his third wife, 20-something underwear model Angelika. The divorce has been delayed by the deaths of Fiona, Evan’s daughter by his second wife, in a treadmill accident, and of Evan and Angelika’s toddler Abigail, who was stricken by anaphylaxis after gobbling down a peanut-laced treat. Ellie worries that the two are connected, but of course the police pooh-pooh her fears. Even when Evan’s second wife, Fern, dies of an insulin overdose, they insist all three deaths are accidents, leaving Ellie to take matters into her own hands. She swoops Angelika and Evan’s remaining daughter, Freya, into her protective custody and asks former housekeeper Vera to come on board, behavior-disordered son Mikey in tow, to ride herd on the grieving brood. And when the Hoopers’ house burns down, sending a concussed Evan to the hospital, Ellie feels time running out before a killer strikes again.

Ellie’s 12th is right on the money, with the heroine giving as good as she gets in her tangles with the boneheaded local constabulary.