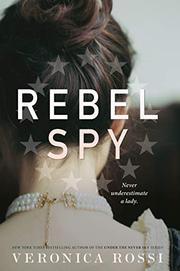 My fair lady is a spy.

Living under the thumb of her abusive stepfather, sea-wreckage diver Frannie Tasker finds a crafty way to escape after a boat trip in the Bahamas, shortly after her mother’s death in the summer of 1776, ends in tragedy. A day of wrecking turns into a thunderous and violent night in which another ship sinks and a young woman drowns, giving Frannie an opportunity to flee. Frannie assumes the petticoats, gown, and life of the late Miss Emmeline Coates and boards the Ambrosia, tricking the crew into bringing her to New York. Little does she know that her subterfuge would lead to a new life of wealth and luxury, espionage and danger. Convinced by her reading of Thomas Paine’s Common Sense while sailing to Manhattan, the heart of the American Revolution, Frannie becomes a spy for the patriots. As a lady with access to some of the crown’s highest officers, Frannie gathers a wealth of information and passes it along to George Washington’s network. Endangering her freedom, life, and reputation by serving as an asset for the patriots, Frannie risks it all. Rich in historical detail and inspired by a true story, daring and courageous Frannie, code name “355,” does her bit for the American Revolution. Frannie is white, her mother was an immigrant from Spain, and she is portrayed as a supporter of abolition.