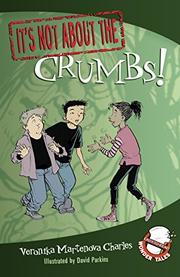 IT'S NOT ABOUT THE CRUMBS!

From the Easy-to-Read Wonder Tales series

Three versions of the Hansel and Gretel tale are strung together in an early-reader format. Three modern kids (the illustrations show a brown-skinned girl, a white boy and an Asian boy) go to the park, dropping popcorn along the way, which reminds them of different versions of the classic tale from Europe, Africa and Japan. Each tells the tale he or she knows from childhood. Typeface changes signal that the narrative has switched from modern time to storytelling. Light black-and-white illustrations grace each page, adding interest to the rather bland text. The hugely artificial construct of three modern children hanging around and telling fairy tales to each other is a weak one, even for an early reader. The stories themselves are an amalgam of many versions, muddying the waters for teachers trying to introduce international versions of folk and fairy tales. That one tale is from Japan and the other two are from continents confuses the matter further. Good intent, poor execution. Other titles in this new series were not seen. (Early reader. 5-8)